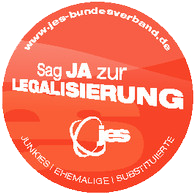 To implement our goals to the re-structuring of German drug politics, JES carries out extensive work in drug politics on site in cities and communities, on local and national level. This includes public relation with which large parts of the population are enlightened on the connection between drug consumption and drug problems in a realistic manner.

We create awareness on what undignified conditions and destructive processes drug users are presently confronted with, how they come about and with what pragmatic steps these connected effects can be eliminated.

German drug politics criminalises drug users and promotes an immense amount of drug procurement criminality. From the point of view of the JES Association, a prohibitionist political approach banning illegal drugs promotes a fully uncontrollable black market. In addition to this, prohibition and repression miss their target of reducing drug consumption. JES therefore supports an ideology free and scientifically based new beginning. At the centre is a legalisation of all drugs, a government regulation for sale and a strengthening of drug users and youth protection through licensed special shops, for example.

Our main steps are:

Necessary partial steps for this purpose are:

There are no upcoming events.